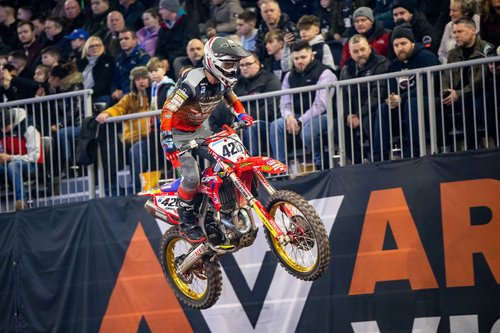 rendon Fastrack Honda made a stunning 2023 season debut in the UK Arenacross series as new riders Conrad Mewse and Josh Gilbert put the squad on top of the Team Championship leader board in front of a sold-out Belfast crowd over two evenings of racing.

The climax of the event was Mewse taking a convincing win in the Superfinal on the second night, when he dominated qualifying, his heat races and the final to take a maximum points haul. And Gilbert ended the two days of racing with a third place and third overall in the series.

This consistency puts the Crendon Fastrack Honda team firmly in command in the Team Championship, ten points ahead of the nearest competitors.

Both riders, new to the team this year, had spent some time testing in Spain to get the Honda CRF450R dialled in to perfection and to get some much-needed dry weather testing. And with neither rider regular Arenacross competitors, it was going to be a baptism of fire in the cut-and-thrust of indoor racing.

Mewse, who has never raced the Arenacross series, was immediately at home on the tight track but was determined to start conservatively and build his speed as his experience grew. By the end of the first night, he was truly up to speed and racing hard.

In the Superfinal, he caught up to the race leader Tommy Searle and put on a thrilling charge. But experienced supercross racer Searle held him off to the line. And right behind the leaders was Gilbert, who had earned his place in the final by winning the Head-to-Head. His incredible ride in the Superfinal put both Crendon Fastrack Hondas on the podium. 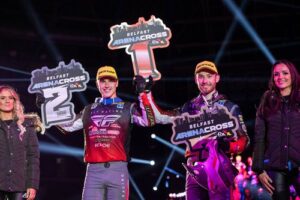 By the second day, Mewse was more confident and it showed. He was fastest in qualifying and won every single race including the Superfinal when he rocketed to a holeshot then immediately put distance between himself and second place Searle. Gilbert didn’t quite get the start he wanted yet still took sixth place in the short-and-sharp races.

Mewse is now second in the series, just a point off the lead, with Gilbert third as the series heads to Aberdeen at the weekend.

ewse said: “Definitely a great weekend and a solid start to my time with the Crendon Fastrack Honda team. I had two great nights of racing and felt very comfortable on the track right from the start.

“I started steadily and improved in every session as I started to enjoy it more and more. By the end of the first night I got second in the main event and was getting better right through that race. Then on day two I was fastest in qualifying, won both heat races and the final.

“I had a lot of fun, it was a great experience and the Honda CRF450R was excellent. And the atmosphere was amazing. I’ve never raced Arenacross before and I loved it.”

Gilbert said: “Belfast was a little bit of a rollercoaster! I definitely didn’t make things easy for myself with making a couple mistakes in my heat races and also getting caught up with another rider. 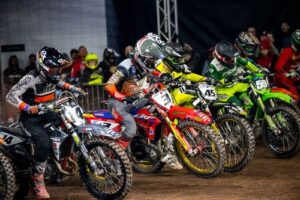 “Overall I can’t be too disappointed with third on night one and sixth on night two. I need to put myself in a better position in the heats for a better start pick in the main event.

“In the Team Championship we won both nights and I’m third in the Pro championship so there’s a lot of positives to take away from my first attempt racing Arenacross.

“I would just like to say a massive well done to the Arenacross team for putting on such a cool event. The atmosphere all around was awesome!”

Team manager triple world 500 champion Dave Thorpe said: “I’m so pleased for all the team. We had two weeks testing in Spain, and the riders and mechanics all worked so well to get the bikes working so well. I’m excited that both Josh and Conrad have really taken to the Honda CRF450R. 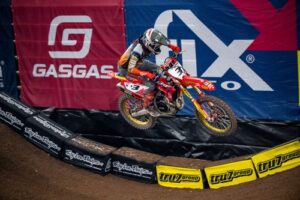 “Belfast was great, and we are looking forward to Aberdeen this weekend.” 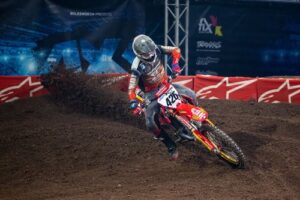