Milan (Italy), April 2, 2021. Pietro Peccenini and team TS Corse will make their debut in the ACO / Le Mans events taking part in the 2021 Le Mans Cup, which kicks off from the opening round of Barcelona on April 16-17. The Italian driver from Milan will get back racing for this new season behind the wheel of the LMP3 Duqueine D08 powered by Nissan that he will share with 26-year-old Irish driver Cian Carey, coming from F3 Cup and British F3.

Born in 1973, after a ten-year career on single-seater cars, last season Peccenini made his debut in prototype racing. He managed to take a brilliant win for TS Corse in the second round of the 2020 Ultimate Cup Series. After the winter break, recently the team got back on track testing the sportscar in Varano de’ Melegari and preparing their 2021 Le Mans Cup campaign. 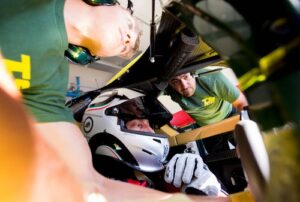 Peccenini says: “This is the more prestigious achievement in our curriculum! We are really up and so happy to be soon in Barcelona for the first race of the season. Le Mans Cup is a highly competitive championship, so we will be humble but also aware of our value. Our team was built thanks to 12 years of hard work: it’s a great team of strong professionals with a deep passion for motorsport. I had the chance to meet my teammate Cian while testing in Varano, he’s fast! There has been an immediate feeling with him, a very good energy. I’m enthusiastic to begin our Le Mans Cup with him, especially in Barcelona, which remind us of many good memories from our racing history. We have to thank deeply our supporters, which we will reward with our 100%”.