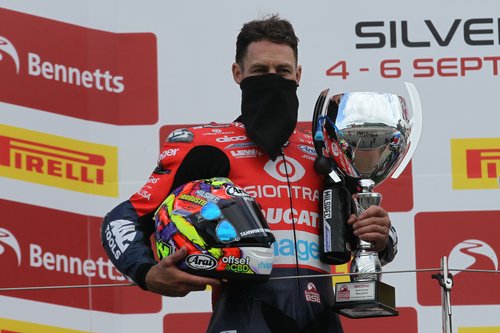 Race 1VisionTrack Ducati’s Josh Brookes stared Race 1 from the middle of the front row in 2nd place, but as the lights went out he was soon pushed back to 6th place. Brookes lost further positions, but was able to gain them all back as the race progressed, eventually crossing the line back in 6th.His teammate Christian Iddon started in 13th, but was also able to progress through the field, to finish his opening race around the Silverstone National circuit in 8th for some well fought points.Issues in qualifying saw Tommy Bridewell line up at the back of the grid on the Oxford Products Racing Panigale V4 R. Despite this starting position, Bridewell managed to climb an impressive 14 places throughout his race, to finish inside the Top 10.Race 2Brookes, who had started from 5th on the grid, led for most of Race 2. Towards the midway point he was starting to get pressure from Tarran Mackenzie, until the McAMS Yamaha rider ran on at Brooklands before going on to retire from the race, momentarily giving Brookes some breathing space ahead of Kyle Ryde on the Buildbase Suzuki and Mackenzie’s teammate Jason O’Halloran.

Meanwhile, Iddon was battling amongst the 2nd group of riders, consisting of Honda Racing’s Glenn and Andrew Irwin, Rapid Fulfillment FS-3 Kawasaki‘s Danny Buchan and Lee Jackson, and SYNETIQ BMW’s Brad Ray, with Bridewell a further second down the road.On Lap 27, Ryde went on to take the lead and subsequently his first British Superbike race win. But Brookes was able to hold off O’Halloran to take a podium place in 2nd.Unfortunately for Iddon, tyre issues saw him drop down the pack to finish a disappointing 13th place.Bridwell had a better starting position in 10th and once again made several passes which saw him finish his race in 6th place.Race 3Brookes was running up in 3rd on the opening lap behind Ryde and Glenn Irwin, before O’Halloran got the better of him. As the race progressed it was Iddon then up into 3rd, and then at the half-way stage Iddon passed O’Halloran for 2nd place.But as the laps mounted, tyre issues once again saw Iddon drop back down the field, until he was joined by fellow Ducati riders Brookes and Bridewell, the latter who had climbed all the way up from 14th on the grid to 7th behind the VisionTrack Ducati duo.

In an exciting final lap Bridwell was able to pass both VisionTrack Ducati riders to take 5th place, his best result of the weekend. Brookes also then got the better of his teammate to take 6th, with Iddon crossing the line in 7th.Brookes and Bridewell are now tied behind leader Glenn Irwin (157) in the championship standings with 122 points each, while Iddon sits in 6th on 106 points.Christian Iddon (VisionTrack Ducati #21) – Race 1, 8th – Race 2, 13th – Race 3, 7th“It’s been a very tough weekend for me. The problems we had didn’t occur until the first race yesterday which was going OK until we had a technical issue with the tyre, and I was lucky to finish. The opening race today was horrendous with another couple of technical problems including another tyre issue so going into the third and final race, I wasn’t feeling confident at all. I tried a different strategy and it was a positive step but with three laps to go, the problems reoccurred, and I got mugged by three or four people. I came here with high hopes and our results didn’t reflect that, so we learn from it and move on.”Josh Brookes (VisionTrack Ducati #25) – Race 1, 6th – Race 2, 2nd – Race 3, 6th“The team did a great job overnight with the bike and it gave me that little bit that I was missing in yesterday’s race but although I led for much of the first race, I knew the guys were right behind me. I just focused on what I could do, rather than worry about their race strategies and was happy with a podium. I was disappointed to finish in sixth place in the second race, but I did the best I could but overall, it’s been a tough weekend. I’m now looking forward to Oulton Park where we know the bike will work better.”Tommy Bridewell (Oxford Products Racing #46) – Race 1, 10th – Race 2, 6th – Race 3, 5th“It was a very tough weekend as we have been suffering with severe chatter problems and I have not been able to find a way around it with my riding. I have tried everything physically possible to try and sort it but it didn’t happen. The team did an amazing job changing so many things on the bike in endless amounts of ways but unfortunately, they never gave us a direction. We made a big fundamental item change for the very last race which gave us light at the end of the tunnel and to now feel like we’ve got a point to work from. Race 3 was like FP1 so I felt like we were a little bit behind but got there in the end. We now have a good start up point for FP1 at Oulton. it was a great job by the team, they gave everything as always. I feel like we are moving in the right direction now and moving forwards for the final rounds. The next three tracks are strong for me and hopefully now we can start winning races again and I look forward to it