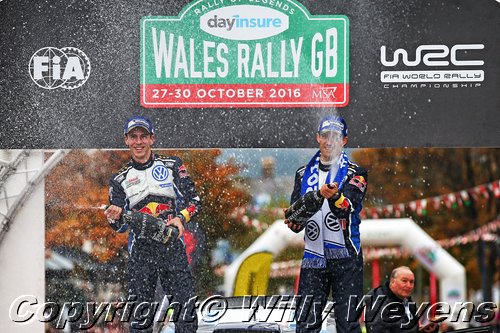 Wolfsburg (30 October 2016). 12 titles in four years – four Drivers’, four Co-Drivers’ and four Manufacturers’ titles: Volkswagen put the icing on the cake at the end of an impressive season in the FIA World Rally Championship (WRC) with victory at the Rally Great Britain in Wales. Sébastien Ogier/Julien Ingrassia (F/F) won round 12 of 13 with the Polo R WRC. This latest victory gives Volkswagen an unassailable lead in the Manufacturers’ Championship. Ogier/Ingrassia ensured the Wolfsburg-based carmaker claimed its fourth Manufacturers’ title since 2013 with the French pair’s sixth win of the season, their fourth in a row. Jari-Matti Latvala/Miikka Anttila (FIN/FIN) and Andreas Mikkelsen/Anders Jæger (N/N) have both won one race so far this year. Volkswagen joins rival Citroën as only the second manufacturer in the history of the World Rally Championship to win all three world titles four years in a row. 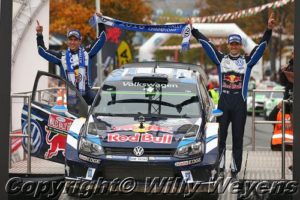 “A great success for Volkswagen,” said a delighted Dr. Frank Welsch, Member of the Board of Management of the Volkswagen Passenger Cars brand with responsibility for “Development”, who received the Manufacturers’ trophy for the victory in Wales. “The Polo R WRC and the Volkswagen Motorsport team have made motorsport history with their fourth title in a row. Given the strength of the opposition, this success has only been possible with a committed team effort, with every single member giving his best for the course. Congratulations and thank you to the whole team.” 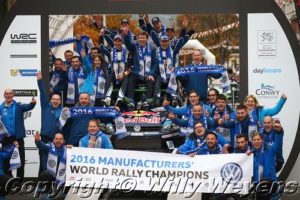 Eight wins in 12 rallies – the latest of these not only crowned a successful season for Volkswagen, but a run of four very special years. 42 wins in 51 rallies since making its debut at the 2013 Rally Monte Carlo make the Polo R WRC the most successful car in WRC history. The world rally car from Wolfsburg has 85 podium finishes to its name. All this has been made possible by an extraordinary team effort from everyone involved, whether on site at the rallies and at Motorsport GmbH in Hannover, or in cooperation with the Technical Development department in Wolfsburg. 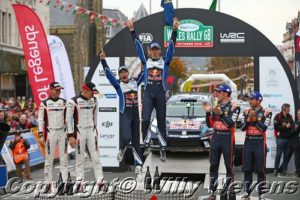 Ogier/Ingrassia style: 12 titles celebrated from the top step of the podium

The sign of four: Sébastien Ogier and Julien Ingrassia were victorious again at the Rally Great Britain in 2016, having previously triumphed in 2013, 2014 and 2015. The latest victory marked the first time in their successful careers that they have won the same round of the World Rally Championship four times in a row. The champions elect* also secured the fourth Manufacturers’ title for Volkswagen. Volkswagen was also able to celebrate the title from the top step of the podium for a fourth time – the fourth time with Ogier/Ingrassia, incidentally. Victory for Ogier/Ingrassia at the Rally Spain in 2013 saw Volkswagen crowned champion manufacturer for the first time. In 2014 and 2015, Volkswagen wrapped up the Manufacturers’ title before the end of the season with victories for Ogier/Ingrassia in Australia. This year’s success at the Rally Great Britain was also the fourth win in a row for Ogier, Ingrassia and Volkswagen, following victories in Germany, France and Spain. 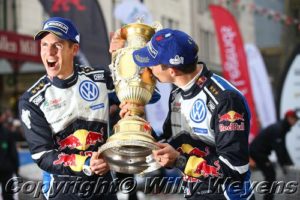 Fog, rain, mud and sludge – the challenges faced at the Rally Great Britain

Two weeks earlier than usual on the calendar, the Rally Great Britain in Wales had some familiar aspects, and some less familiar. The morning fog and muddy gravel roads were familiar. The little rain, the appearance of the sun at times, and temperatures above 10° Celsius were less familiar. The conditions on the 22 special stages were extremely slippery and demanding, as you would expect in Wales. Ogier/Ingrassia led from the opening stage and took full advantage of the slight benefit that came with opening the route as the championship leaders. However, victory was far from stroll in the park: Ott Tänak/Raigo Mōlder (EST/EST, M-Sport-Ford) emerged as their toughest rivals. The battle between the Michelin race tyres, which Volkswagen uses, and the D-Mack tyres was once again won by Michelin. The French tyre maker claimed its 301st success in the World Rally Championship.

In contrast, Andreas Mikkelsen/Anders Jæger and Jari-Matti Latvala/Mikka Anttila lost significant amounts of time on Friday due to damaged drive shafts. The Volkswagen engineers came up with a solution on the very same evening: the cause was a new seal, which had been tested successfully ahead of the rally, but which did not work in the unique conditions in Wales. The Polo R WRC was as reliable as ever on the remaining 16 special stages, and Mikkelsen/Jæger and Latvala/Anttila were on top form. Latvala/Anttila fought back to make up over a minute on their closest rivals and ultimately climb into sixth place overall to help Volkswagen secure the Manufacturers’ title.

Volkswagen contested its 50th Power Stage with the Polo R WRC at the Rally Great Britain. Andreas Mikkelsen and Anders Jæger finished second on the final special stage of the rally to claim two bonus points. This was the 91st time that a Volkswagen driver had picked up extra points in the Drivers’ and Co-Drivers’ competition. The stage win has gone to Wolfsburg on a remarkable 38 occasions. Since 2013, Volkswagen has scored 194 points on the Power Stage – that is the equivalent of just short of eight race wins. 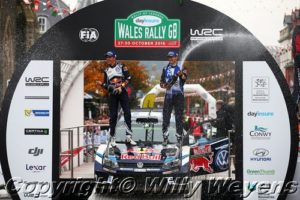 The FIA World Rally Championship (WRC) will draw to an exciting close at the finale in Australia. Four driver/co-driver duos could still clinch second place overall down under (17 – 21 November), including Volkswagen’s Andreas Mikkelsen/Anders Jæger. The Norwegians are third after the Rally Great Britain and trail Thierry Neuville/Nicolas Gilsoul (Hyundai) by 14 points. A maximum 28 points are up for grabs at any round of the world championship.

Quotes after day three of the Rally Great Britain

“This victory is fantastic. I am so delighted that we have wrapped up the Manufacturers’ title for our fantastic team. It was hard work hanging onto our lead in these extremely slippery conditions here in Wales. Ott Tänak put us under a lot of pressure, so Julien and I had to push ourselves to the limit all weekend. But we did it. Looking back, we have all been on an incredible journey over the past four years. To have such a run of success is definitely something very special – particularly in motorsport, where so many different factors come into play. I am very happy that I opted for Volkswagen before anyone knew where this WRC adventure would take us.”

“Looking at today on its own, we did our job: we overtook Østberg and ended the rally in seventh place. On the whole, we were obviously hoping for a lot more from the weekend and are not happy with this result. On the other hand, Volkswagen claimed its fourth Manufacturers’ title in a row thanks to our team-mate Sébastien Ogier’s win. That is obviously a fantastic success for the entire team here and at the headquarters in Hannover. We will still push hard again in Australia and look to improve our record for this season.”

“I am very pleased for our Volkswagen team that we have once again been crowned world champions in the Manufacturers’ Championship. That is no less than we deserve, and I am pleased to have contributed a little here and there. From a personal point of view, I am obviously disappointed with the outcome of the Rally Great Britain in general. We wanted to battle with Thierry Neuville for second place in the championship here, but unfortunately that was not to be. A drive shaft was damaged on Friday and we consequently lost many minutes. That is a real shame, but that is motorsport. These things can happen. We then focused fully on the Power Stage and really gave it our all. We could not have done any more and came away with two points. We will now have to do our very best in Australia to finish second in the world championship. That is exactly what we plan to do.”

“A performance worthy of world champions from Sébastien Ogier and Julien Ingrassia, and a fantastic day for Volkswagen. To win all three titles in the World Rally Championship for the fourth time in a row is anything but a matter of course. It takes a lot of work from the entire team to be so successful. I am extremely proud of the whole team. Drivers, co-drivers, engineers, mechanics, logisticians, the medical department and catering team, meteo and weather crew, and team management – everyone has played an important role. The dedication they show Volkswagen, and their team spirit, cannot be beaten.”

And then there was …

… “Bertie the Beetle”. Bob Beales, Mark Murphy, Mark Walters and Co. run a 58-year-old Volkswagen classic in the national championship, which is held at the same time as round 12 of the world championship in Great Britain. However, “Bertie”, as the Beetle is affectionately known by his team, suffered a technical issue on Saturday evening. A ball joint on the track rod had broken. Volkswagen Motorsport did not have the right spare part for “Team Colorado”, but Gerard Jan de Jongh and Richard Browne, whose regular positions are race engineer for Sébastien Ogier and Andreas Mikkelsen, were able to help out with their engineering know-how and the right tool. “Bertie” returned to action at the Rally Great Britain on Sunday.