Yesterday, on a holiday dedicated to brave men, the Malachite Rally finished in the Chelyabinsk region; Sergei Remennik and Marina Danilova in Oreca Suzuki Swift R4 became the winners in the overall standings!

2021 Malachite Rally was held on 22-23 February* on the three-dimensional high-speed roads near Kyshtym and Novogorny towns, that are so beloved by the participants and spectators, with a novelty from the organizers – ice special stages in the town of Karabash; it is the 5th round of the Russian Rally Cup and the 2nd round of the Ural Federal District Rally Championship. 40 crews from all the rally standings set off to the fast Chelyabinsk roads to show courage and defend their sporting honor; in the overall standings in all-wheel drive vehicles, five more fast crews from Asbest, Izhevsk, Perm and St. Petersburg kept Remennik and Danilova’s company. 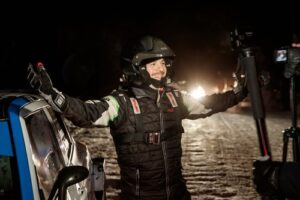 The main philosophy of the extensive test program of Sergei Remennik and Marina Danilova is to learn how to communicate with the kit car from TBRacing on an equal footing, as it was with the previous production sports vehicle of N group, in order to go back to the FIA European Rally Championship tracks. To do this, the crew and the sports team chose short rallies of the Russian Rally Cup, having different characteristics of special stages – ice tracks to slide, various combinations of “working” roads with jumps, inclines, and a negative profile of curves in corners in order to learn how to work with the power characteristics of Suzuki engine unit.

The first rally day consisted of 32.60 competitive kilometers: there were two special stages in the vicinity of Kyshtym, which are laid along the same road, but in different directions. The road consisted of two sections with different characteristics: the first part was very wide with a dense rolled surface, bends and jumps, where cars noticeably drove offthe road, and the second one that was much narrower with a loose surface and tosses. The second passage through the special stage was in the dark – the perception of the route described in the notes can vary greatly in the light of the “chandelier” of the additional head light. And not everyone was able to overcome the night distance without problems – four cars went off the track at the night special stage. But Remennik and Danilova won both special stages of the first rally leg and were ahead of the nearest pursuer by 18.6 sec.

Sergei Remennik, driver, “We continue to study this car; of course, on such roads the maximum speed that we had half of the special stage is not enough. Somewhere a GPS sensor showed that our speed was 165 km/h; the roads are very fast here. On the second part of today’s roads, we’ve been driving rather carefully… The car behavior on a winter surface and on a gravel, one is very similar in terms of starting to turn or to slide in advance – namely, to “carry the speed”. The main difference between the Suzuki Swift and those cars that I used to drive is a weak engine, and I need to work very actively in gear shifting to keep it in the working range. This is what I’m learning now”.

On the second day of the rally, early in the morning, the sports field moved to Karabash in order to overcome two new special stages one after the other. However, during the night a blizzard broke out and the ice track on the water area of ​​the Bogorodsky pond was swept – the road became narrower and it was difficult to start first. At the “Sak-Elga” special stage that is not wide and full of sharp corners, the snowstorm also slightly changed the reality regarding the recorded notes. And the drivers were surprised that the results of the second pass at each special stage became worse. The crew of Sergei Remennik and Marina Danilova increased the gap from the pursuers to 01:11.5 min.

After a service break, the final part of the racing day went on a well-known forest special stage along Lake Akakul in the Ozersky District of the Chelyabinsk Region. A blizzard raged all over, sweeping the roads and throwing snow dust into the air with white curtains, and the wind chilling reached -41°C. Despite the difficult weather conditions, the rally participants reached the finish line without incidents, only six crews could not finish – the reasons for the retirements were related to technical issues.

Sergei Remennik, driver, The rally went fine, it seems, we’ve reached all our goals! During the last two special stages there was such a “safety struggle”, because the roads were swept, we could see nothing in a snow dust; in some places we touched an asphalt with our wheels – it was slippery there, but in the forest part of the route it was loose and difficult to turn. I also observed my Kyshtym’s tradition – to miss some corner and drive straight ahead (past the special stage).

The car is expectedly comfortable to drive on the ice. In terms of the response time, it forgives steering mistakes; the car is really easier to drive – the steering rack is shorter, you make less movement. In this car you can start braking much later, than in N4 class vehicles. Everything is quite comfortable, and, in general, the car is cool, I’m glad that our test program goes as it was planned.

The rally in Kyshtym is wonderful, as usual! The weather pleases us (it’s sarcasm), there was such a white wall at the last special stage, that we could see nothing – it was cool! It’s really great that there are different races not far from home – we have a rally in Asbest, there is Malachite, there are Vyatka and Barda. It’s great that in the Urals you can participate in the different and interesting rallies with simple logistics and low costs”.

In addition to tackling the test tasks, the crew of Sergei Remennik and Marina Danilova won the 2021 Malachite Rally, leaving the closest pursuer 1.5 minutes behind them.

23 February is the Day of Military Glory of Russia – Defender of the Fatherland Day. The date was chosen because on 23 February, 1918, the Red Guards are believed to have had the first victories near Pskov and Narva over the troops of Kaiser Germany. It is a public holiday, the days of the week of which are declared non-working. The rally organizers, keeping their own tradition, hold the race traditionally on these dates and, if necessary, postpone the rally from the weekend to other days 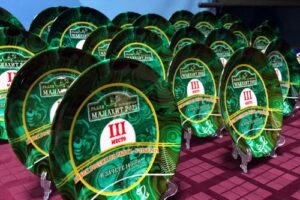