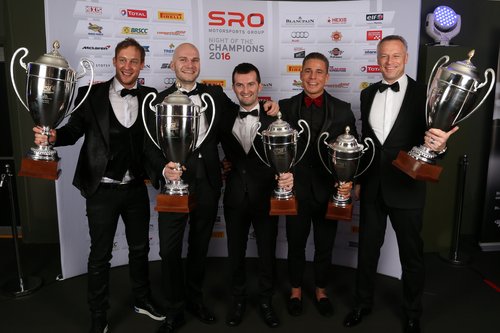 The 2016 Competition102 GT4 European Series came to an end with the annual SRO Night of the Champions in London on Sunday evening.   Drivers and teams from all SRO Motorsports Group promoted and organised championships gathered in London for the end of season ceremony.

GT4 European Series champions Jörg Viebahn and Peter Terting collected their trophies for winning the GT4 Pro class, with team manager Steve Buschmann taking the stage to pick up the trophy for the winning team.

Viebahn and Terting were joined on stage by teammates Nicolaj Møller Madsen and Andreas Patzelt, who finished third in the championship, and second-placed Mads Siljehaug. Buschmann was joined by Racing Team Holland by Ekris Motorsport’s Stian Boers and Villorba Corse’s Francesco Gromeneda.

Jérôme Demay and Jan Kasperlik attended the awards ceremony at The Pavilion at the Tower of London to collect their trophies for finishing first and second in the GT4 Am class of the GT4 European Series.

The opening round of the 2017 season will take place at the Misano World Circuit Marco Simoncelli on April 1st and 2nd. Further details about the 2017 calendar will be announced at a future date.

Pirelli, official tyre supplier
Pirelli is a tyre manufacturer and world leader in the automotive industry. It has an exclusive relationship with over 50 racing series worldwide, including Formula One. Pirelli has a long and illustrious history in endurance racing, and has also claimed a huge variety of class wins in GT racing all over the world. The design of the new Pirelli GT tyres meets the needs of GT racing while maintaining the performance characteristics that endurance drivers have appreciated in the past. The slick tyres used for GT racing are branded Zero: just like the slicks that have become a central feature of Formula One. The name P Zero is used in the highest categories of motorsport such as GT racing. 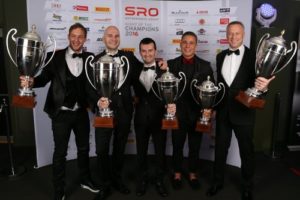