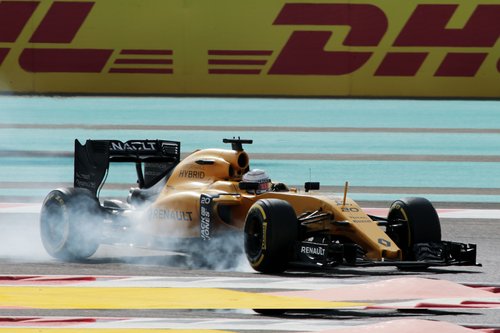 Renault Sport Formula One Team ended the year in ninth position in the Constructors’ Championship with Kevin Magnussen sixteenth and Jolyon Palmer eighteenth in the Drivers’ Championship.

Jolyon made a great start from P15 to end the first lap in eleventh position, however he struggled with tyre degradation later in the race. He also received a five-second penalty for contact made with Carlos Sainz. Kevin’s final race for the team saw contact made at turn eight on the first lap. He pitted for a front-wing change, however he retired shortly afterwards due to suspension damage as a result of the first lap incident. Renault Sport Formula One Team ended the year in ninth position in the Constructors’ Championship with Kevin Magnussen sixteenth and Jolyon Palmer eighteenth in the Drivers’ Championship. 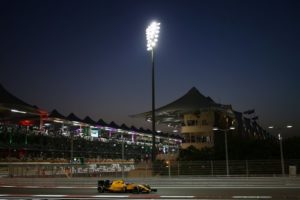 Kevin started the race from P18 with new set of Pirelli’s soft compound tyres. He stopped at the end of the first lap to replace his front wing and receive a new set of soft tyres following contact at turn eight. He retired with five laps completed.

Jolyon started the race from P15 on a set of Pirelli’s ultra soft tyres. He made a storming start to P11, pitting for sets of new soft tyres on laps 7 and 21. He made a final stop on lap 41 for a fresh set of the super soft tyres.

“I made a poor start then was in a fight with Kvyat at turn eight when I had contact from another car – I think it was a Manor or a Sauber – and my suspension was damaged by this. We tried to continue but it was clear that something was broken. It wasn’t the way I wanted to end what I thought was a good season with a great bunch of people. Results-wise it hasn’t been the best but I’ve learned a lot, I’ve had a great time with the team and I got to know a lot of really good people. I wish Renault Sport all the best in the future and I’m sure we’ll all still have fun in the paddock.”

“I had a really good start – up to eleventh – and was keeping pace with the Williams for a while, but unfortunately the tyre degradation was unbelievable for us. The overall pace was okay, but the tyres were running out, which meant I had to do three stops. I was trying to fight with everyone through the race but I had no grip which makes it very difficult. I tried to pass Carlos as he left a gap, but he braked a bit early and I had no grip to slow down. It’s a real shame.” 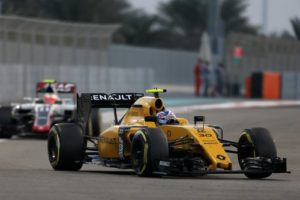 “That was not the Grand Prix we wanted to end our season. Kevin’s race was cut short as a result of front suspension damage sustained on the first lap then Jolyon’s great start didn’t translate to a great finish come the chequered flag. Today’s result should not detract from all the progress made at Viry and Enstone over the last year as we will be in a far better position to fight for more points next season. Thank you to Kevin in his final race for us, he is a popular driver and we wish him well for the future. Congratulations to this year’s champions, Nico Rosberg and Mercedes AMG. They have shown us how championships can be won with fine displays through the season. We hope to be giving them more of a challenge over the next few years.” 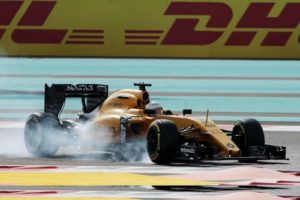