Alexey Lukyanuk, driver, “We dominated this rally from start to finish. I’m super happy and excited about our performance. It was so consistent, so in control. We enjoyed all the stages together with Alexey, he was reading amazingly. Thanks to all our sponsors, to our team for a perfect car, for support and all the things they do for us. Thanks to Eurosport – our fans can feel all these emotions and see them on the TV”.

A real positional struggle was played out between the Pole Miko Marczyk and the Spaniard Efren Llarena – both drivers claimed for the title of 2021 vice-champion. The Spaniard beat the Pole at the finish line with a difference of 0.07 seconds that was equal to two points! Moreover, the outcome of this battle decided who would become the European Champion among co-drivers. Thanks to the fact that rising European Champion Andreas Mikkelsen changed the co-drivers during the season, Llarena’s second position brought his permanent co-driver Sara Fernández to the first one – she is the European Champion! Another good news for the fans of the Russian crew is that Alexey Arnautov became the third in the standings among the co-drivers. 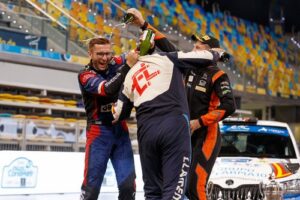 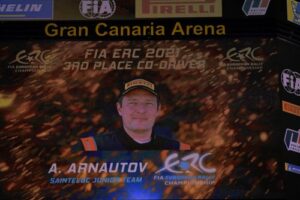 Alexey Arnautov, co-driver, “Of course, the third place at the end of the season was unexpected for me. At the beginning of the year, I promised Alexey to drive five races together and, frankly speaking, chose the ones that I like more. Two victories and two finishes on the podium are not bad, but I didn’t expect that the points gained would be enough for anything… I was lucky that Mikkelsen changed co-drivers too often, dividing the points between them, so the driver’s first place does not mean at all that his co-driver will also get the first place. There was a shift upward and Llarena’s co-driver – Sara Fernández became the European champion in our standings, Szymon Gospodarczyk was the second, and I automatically became the third. In general, I’m satisfied, a good season for me (laughing), I didn’t expect it, but it turned out that way!”

The crew of Alexey Lukyanuk and Alexey Arnautov would like to thank their partners, without whom these outstanding performances simply would not have taken place, and their constant fans from all over the world for their incredible emotional support, which is also very important! 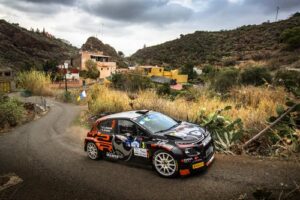