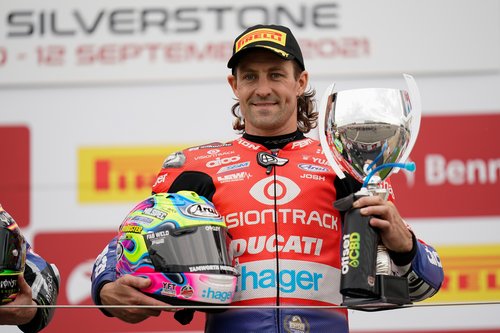 Josh Brookes confirms his place in the Showdown
• Josh Brookes gets his first podium of the year in Race 2, before scoring a consecutive podium in Race 3
• Christian Iddon and Tommy Bridewell finish Race 1 in second and third respectively

The safety car came in on Lap 7, with Jason O’Halloran pouncing into the lead on his McAMS Yamaha. His teammate Tarran Mackenzie was also on the move and by Lap 21 was up into second place.

But drama on the penultimate lap saw a coming together between the McAMS Yamaha duo at Brooklands with both riders crashing out. This allowed Honda Racing’s Glenn Irwin to come through and snatch the lead and the subsequent race win.

VisionTrack Ducati’s Christian Iddon was promoted to second to end his run of recent run of bad luck, a fantastic result considering his eleventh-place grid spot. Bridewell was able to take the final podium position on a motorcycle that had only just been rebuilt following a crash in qualifying.

Josh Brookes’ Showdown hopes took a boost with after he crossed the line in fourth, while his main rivals both scored DNFs; Danny Buchan crashing out early on his SYNETIQ BMW, and Lee Jackson retiring from the race with a technical fault on his FS-3 Kawasaki. 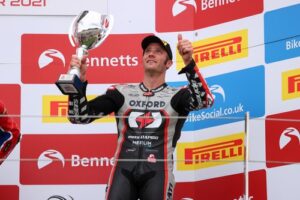 Race 2
Brookes scored his first podium of the season in the first of Sunday’s two races. But Brookes’ third place finish came with mixed emotions after the VisionTrack Ducati rider had led for the entire race, before being passed by the McAMS Yamaha riders Mackenzie and O’Halloran on the final lap.

Iddon was lucky to stay on his bike after he lost the front half-way through the 30-lap race and although he made a great save the incident cost him several places, and he eventually finished his race in seventh.

Bridewell had been running as high as second behind Brookes towards the two thirds race distance but dropped down the order slightly to take the chequered flag in fifth.

Race 3
With a third of the final British Superbike race of the weekend covered, the race was red flagged when Luke Stapleford crashed his Buildbase Suzuki after his engine blew up and contaminated the track. 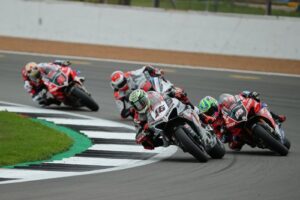 The 15-lap restart saw Brookes start from pole with Bridewell next to him in second with the pair of them maintaining those position as they completed their first lap.

Bridewell was soon passed by McAMS Yamaha duo O’Halloran and Mackenzie and dropped to fourth, just ahead of Iddon.

A couple of laps later O’Halloran passed Brookes for the lead, with Mackenzie passing shortly after, demoting Brookes to third ahead of Bridewell and Iddon.

With the Yamaha riders clearing off the front the battle for third looked to be on with Brookes and Bridewell, with the pair swapping places in the final laps.

O’Halloran went on to take the win ahead of Mackenzie, but it was Brookes who took the final podium position and confirmed his place in the Showdown as a result to the delight of his VisionTrack Ducati team.

All three Ducati riders have now made it into the Showdown, ready to fight for the title. 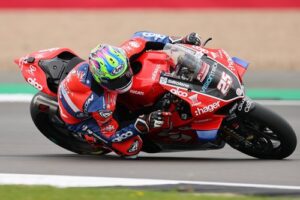 Josh Brookes (VisionTrack Ducati #25)
Race 1, 4th – Race 2, 3rd – Race 3, 3rd
“It’s obviously been a pretty average season by my standards, but I’m pleased with the two podiums today and delighted to continue my run of making it to the Showdown every year I’ve contested BSB. The improvements we’ve made of late are coming to fruition now and I’ve had the potential for a while without being able to convert my pace into results. Today we did that, and the third race in particular was good, and I felt really good as it was a proper dog fight and a great battle to be part of. I’m still taking it race by race, but we can be proud of our efforts this weekend and I’m really pleased for the team, and everyone connected with it.” 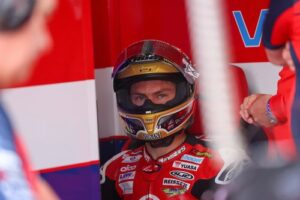 Christian Iddon (VisionTrack Ducati #21)
Race 1, 2nd – Race 2, 7th – Race 3, 6th
“We made some changes after Saturday’s race, and we’d gone the wrong way with set up, so we weren’t as competitive as what we’d been before whilst I’ve no idea how I stayed on after being hit by another rider. It took me a while to regroup after that, but we were missing that little bit, particularly with tyre life, although things were a lot different for the final race. The bike was working really well although I got caught out by a cold tyre and ran wide and then did so again when I got clipped once more. The red flag helped me out as I managed to go from 12th to fifth and so a podium was definitely on the cards. I got mixed up with Tommy Bridewell and the chance went so I’m a bit frustrated, but we haven’t lost much ground in the championship this weekend and it’s all about the Showdown now.”

Tommy Bridewell (Oxford Products Racing Ducati #46)
Race 1, 3rd – Race 2, 5th – Race 3, 5th
“It was always going to be tough at Silverstone. I’m actually really happy with the way I rode. I feel fantastic in my riding at the minute. I feel like whatever I have under me I am maximising and getting the best out of. So that, as a rider, mentally and everything, you can’t do no more about it. I just struggled to stop in the last race then, it hampered me to fight harder. Kind of got in a dogfight with Christian and then lost a bit of tow. But once I got clear of him, I could get my head back down and drag Josh back in. It is tricky but I’m happy with the way I rode and the way the team worked. We now need to take chunks out of the two Yamahas. They’re going to be hard to beat, they’re both riding great. Going into to Oulton we can take some good points out of Taz, it’s not the strongest circuit for him, but also now I need to beat Jason now in every race if possible and I’m just going to have to do whatever it takes to just do that. The good thing is now that if I win and he finishes third or fourth or whatever it may, be you can close the points deficit a lot faster. And I feel that closing that points deficit is more than doable. We need a bit of luck. Hand on my heart, I feel like I’ve got a good shot, if I can carry on riding the way I am I can fight for title. Bit of luck my way wouldn’t go amiss but I’ll still just pull the handlebars of it and ride as fast as I can.” 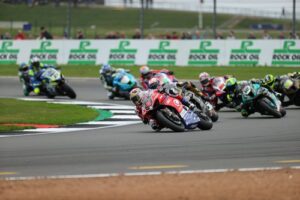