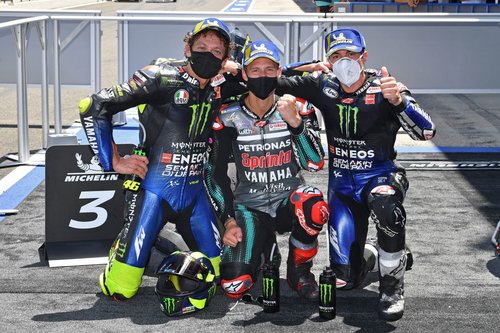 Fabio Quartararo didn’t put a foot wrong in today’s MotoGP race, leading from the lights to the flag and making it back-to-back victories in Jerez. Quartararo also extended his lead in the championship standings. Unfortunately, it was ultimately a race to forget for team-mate Morbidelli, who was forced to retire with mechanical problems after fighting in the podium positions. 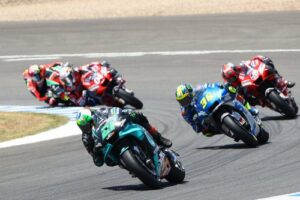 Quartararo made the perfect getaway off the line and held the lead into the first corner. From then on the Frenchman made no mistakes and with every lap raced he continued to extend the gap to the rest of the field. While the race behind became one of attrition, Fabio saw none of it as he was in a race of his own out front. Despite slowing down to celebrate with his team on the final lap, Quartararo finished 4.495secs ahead of Maverick Viñales and Valentino Rossi, who helped to make it a Yamaha podium lockout – the first one since Phillip Island in 2014. This second win sees Fabio extend his lead in the MotoGP World Standings to ten points, and maintain PETRONAS Yamaha SRT’s place at the top of the Team’s Championship. 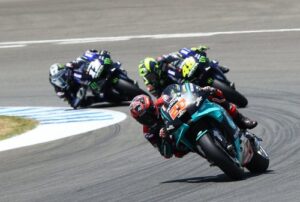 While there were celebrations for Fabio, it was heartbreak for team-mate Morbidelli. The #21 rider, who started his 21st MotoGP race as a PETRONAS Yamaha SRT rider today, was having a good race. The Italian soon made his way through the pack in the opening laps of the race, and was soon in contention for a podium place. Unfortunately with nine laps left to go, Franco’s Yamaha YZR-M1 experienced technical issues and he was forced to retire from the race. 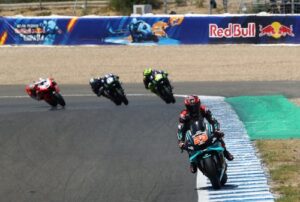 The next race for Fabio and Franco will be in just less than two weeks, when the MotoGP paddock moves to the Automotodrom Brno, in the Czech Republic, for their third race of the season (7-9 August). 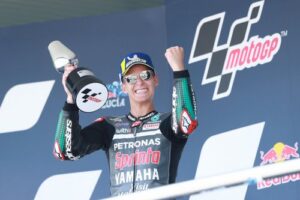 Razlan Razali
Team Principal
Another great weekend for us. It was a great redemption for John McPhee who raced very smartly this weekend. Second is a good result for him and now he is in third position and only ten points behind the leader in the standings. I’m very happy for him. KIP improved and we expect him to do a lot better in subsequent races. We hope that he’s learned from this weekend and will be able to do better in the Czech Republic. 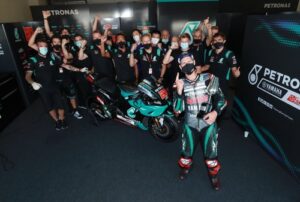 We were very satisfied with Xavi’s eighth position; it shows that he has what it takes. Apart from the problems with his bike, he’s done very well today. Unfortunately for Jake he was pushing too hard this weekend, but I’m sure he will pick it up at the next race at Brno. 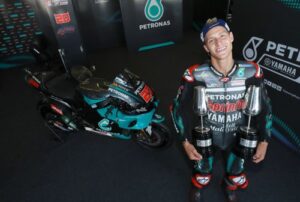 It was another fantastic win for Fabio in MotoGP! These back-to-back victories put him at the top of the championship standings. It’s very unfortunate for Franky as I think it could have been a one-two for us today, but we need to see what the problem was. We feel so sorry for him because he was strong all weekend and deserved a good result. Even so, it was still an awesome weekend because of the back-to-back wins and leading the championship. Now we just have to try to do it all over again in Brno!

Fabio Quartararo
1st (41’22.666)
It was a tough race. To complete 25 laps in front in these temperatures made it the hardest race of my life! My hands and feet were so hot and there was just no air to cool you down. I felt really good on the bike though. Even though we are at the same circuit as last week, the conditions are different and we had to adapt so quickly to this. The first time I saw the gap to Valentino [Rossi] was 0.6secs, I thought that it was time to push. Then on one lap I looked back in Turn 6 and couldn’t believe the advantage that I had pulled out. At this point I knew I had to keep calm and just finish the race. I’m so happy to have another victory, especially in a race as tough as this one. It was also amazing to be on the podium with Valentino because he has been my idol for so long. I just want to say a massive thanks to my team, Yamaha, partners, my family, my friends, my manager and all the fans for their support. 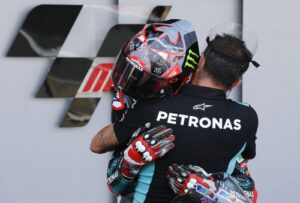 Franco Morbidelli
DNF (+9 laps)
I didn’t have a great start and so I had to fight my way back through the pack, but I was able to do so quite comfortably. I was feeling great on the bike, the feeling was amazing and I thought it was a great opportunity to get an excellent result, maybe even the podium. We had a really good race pace. Then the mechanical failure happened and the bike stopped, but that’s racing. It happens sometimes. We don’t know what caused the problem, but the team and Yamaha engineers are looking into it. Now we take the positives from this weekend and the previous one, where we had consistent race pace, and focus our energies on Brno. 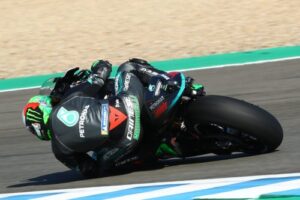