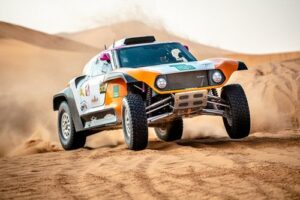 However, the result itself was not paramount for Peterhansel in Saudi Arabia. The French driver was
particularly interested in getting to know the terrain and the conditions in the Arabic country. He was
also working with co-driver Fiúza for the first time and the pair improved as they progressed through
the stages. After claiming third place in the prologue, they reached second place on Friday. They then
secured the win today and second place overall – just 46 seconds behind Saudi driver Yazeed Al- Rajhi. 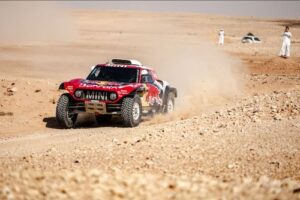 Seaidan was competing in his home race but was driving the MINI John Cooper Works Buggy for the
first time. Seaidan had previously competed in the MINI ALL4 Racing and in the MINI JCW Rally and
he began the Baja with fifth place in the prologue. He was in good form on the next two stages.
However, he then had a puncture that cost him a few minutes. After three days, he reached third place overall.

Stéphane Peterhansel
“It was fascinating to discover the landscape in Saudi Arabia and the Baja was faster than we had expected. I’m super satisfied with the MINI and the tests in Morocco really paid off. With Paulo, I had a co-driver next to me for the first time who doesn’t speak French, so I needed some time to adjust, but then it went well.” 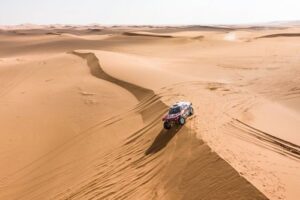