The Portuguese team, defended by Henrique Chaves and Miguel Ramos, ended the GT Nations Cup in tenth, a category that integrated the “Motorsport Olympic Games”, after being in contention for a medal.

After the retirement in the first qualifying race, in the second, the Portuguese duo crossed the line in second, which gave good perspectives to the team for the Final.

The Audi R8 LMS GT3 with the Portuguese colours started the final race from eleventh, and to get a good result a good recovery was needed.

The Torres Vedras’ driver did the first stint and was really impressive in the start, taking the Portuguese car from eleventh to third in the first lap, after some amazing overtakes with fantastic precision.

In a wet track, but drying up, the Portuguese driver lost some position to cars with slick tyres, but the rain reappeared, and in the end of his stint he was second, with a medal within his reach.

However, already with Miguel Ramos at the wheel of the Attempto Racing’s car, a Safety Car situation ended too soon and with worn tyres for treacherous conditions, the Vila Nova de Gaia’s driver lost positions, ending in tenth when the race was again neutralized.

“We started with wet tyres, but probably the slicks were the best choice and that limited our strategic choices, as, during the race, we can’t put new tyres from the same type – with the rain getting worse, he had to keep the same tyres set, that were well worn from my stint. Miguel got himself in a tough situation, the rear tyres were completely worn, and in the wet track he aquaplaned”, said Henrique Chaves.

After an extremely hard weekend, the Portuguese duo was near a medal, which was impossible to reach after an optimistic ending of a Safety Car period. In the end the tenth place didn’t reflect the true team’s potential. However, the driver from Torres Vedras finds some positive aspects from the event. “We had some setbacks during the weekend, but we overcame them, and we were in contention for a podium position, after a good start. We had some bad luck, as we lost eight positions in the second stint in the single lap without Safety Car – something that I don’t understand, because the track was very wet, full of rivers and that caught Miguel. It wasn’t the result that we waited for and that was within our reach, there were some mistakes and we did some good things. We have things to learn, but now it’s time to celebrate what we did well”, finalized Henrique Chaves. 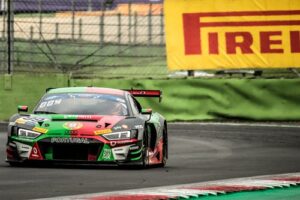