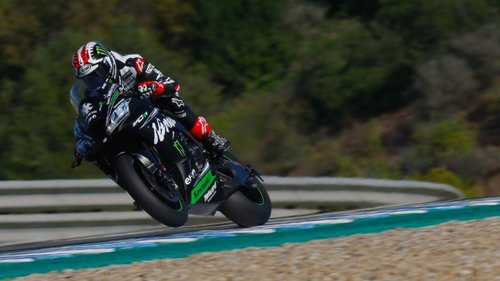 Sun shone down on the opening day of testing around Circuito de Jerez Angel Nieto and the MOTUL FIM Superbike World Championship riders were out to make some strong steps for 2019. With four teams out on track, we were treated to an abundance of new bikes, new riders and new teams and plenty of laps were put in around the 4.4km track.

Jonathan Rea (Kawasaki Racing Team WorldSBK) has been working through his testing programme, meaning he had a busy day around the circuit. Working with suspension, tyre work, finding a balance with their chassis and weight distribution and their new engine, it was a productive day for the reigning world champion who came out on track at 1pm and shot right to the top of the timing screens. Rea ended day one with a time of 1.39.657, putting in 57 laps.
Leon Haslam (Kawasaki Racing Team WorldSBK) is continuing to get used to his new bike and team, and is focusing on putting in as many laps as possible throughout the two days in Andalusia. Despite suffering a crash through turn five in the early afternoon, the British rider ended day one in fifth putting in 71 laps, with a time of 1.40.390.

Aruba.it Racing – Ducati had a big day in Jerez as their new recruit in Alvaro Bautista began to get to grips not only with his new team, but also adapting to the World Superbike machine. Focusing on his pace with the all new Ducati Panigale V4 R, he was able to impress on his first day of the ‘new era’, setting a 1.39.919 after an impressive 65 laps, he ended the day in second position. Whilst for Chaz Davies (Aruba.it Racing – Ducati) who is embarking on his third day with his new bike – his second in the dry – he was still working on base setting for 49 laps. His time of 1.40.202 put him in third overall.

Brand new WorldSBK team GRT Yamaha had their first day with the step up into the premiere class, with experienced Marco Melandri and WorldSBK rookie Sandro Cortese. Spending their first day getting adapted to the YZF-R1, the team are taking things step by step and were able to put in 125 laps collectively. Melandri ended day one in sixth, whilst Cortese finished the day in eighth.

around MotorLand Aragon. With elements of their chassis, swing arm and electronics to work on, the 2018 race winners had another productive day in Spain. Lowes was never outside the top four and ended in fourth with a time of 1.40.296. Whilst van der Mark was taking a more steady approach and ended with a time of 1.41.572 in seventh position.

It wasn’t only SBK® teams testing, as there were three FIM Supersport World Championship teams out on track. MV Agusta Reparto Corse had 2018 star Raffaele De Rosa out on track, whilst Kawasaki Puccetti Racing took to the track with Hikari Okubo and Team Pedercini Racing were putting in the miles over the winter.

Action resumes on track tomorrow for the final day of pre-season testing in November. 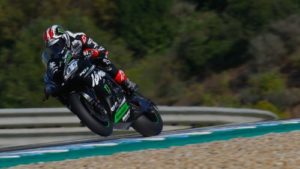