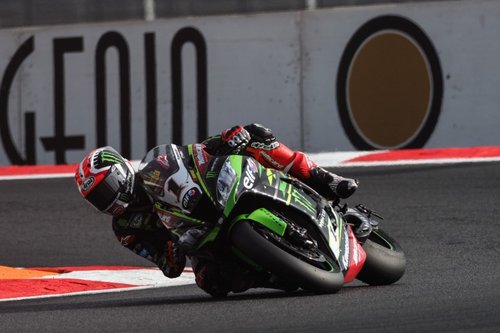 Jonathan Rea (Kawasaki Racing Team WorldSBK) issued a strong statement of intent on Friday at the Circuit de Nevers Magny-Cours, taking the top time in Free Practice as Round 11 of the MOTUL FIM Superbike World Championship got underway in France. Tom Sykes (Kawasaki Racing Team) followed his teammate on the timesheets in second, with Alex Lowes (Pata Yamaha Official WorldSBK Team) in third.

The Northern Irish rider said on Thursday that the “fairytale” result for him at the Acerbis French Round would be to clinch his fourth consecutive WorldSBK title with a win, and if his pace on Friday is anything to go by then Rea is in a prime position to do just that. A best time of 1’37.202 managed in FP1 was enough for the man from Ballymena to top the day’s timesheets, although he also claimed the fastest lap in FP3 to top off a near-perfect day. 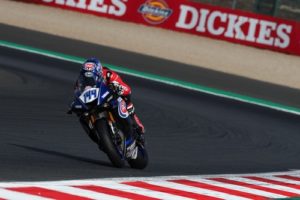 Tom Sykes (Kawasaki Racing Team WorldSBK) was also amongst the top three fastest in every Free Practice session on Friday, ending the day in second place in the combined standings. A strong effort overall from the Kawasaki Racing Team who could make history at the last European round of the year.

Lowes was closest to the KRT duo on Friday, closing the gap with Rea to 0.287 seconds with the third fastest time. He leads his way into Saturday ahead of Lorenzo Savadori (Milwaukee Aprilia), who put in another superb Friday performance to claim fourth fastest in France, whilst the fifth fastest time went to Michael van der Mark (Pata Yamaha Official WorldSBK Team).

All four Ducati bikes on the grid managed to make their way into the top 10 on Friday, but not without some late drama as Michael Ruben Rinaldi (Aruba.it Racing – Junior Team), who had struggled in the first two sessions, finally found his pace in the closing minutes of FP3 and shot up to sixth on the timesheets. That lap momentarily put Chaz Davies (Aruba.it Racing – Ducati) outside the top ten, but a strong final lap from the Welshman moved him up to seventh and above teammate Marco Melandri (Aruba.it Racing – Ducati) in eighth, while Xavi Fores (Barni Racing Team) made his way into tomorrow’s Superpole 2 with the ninth fastest lap.

The late surprises in FP3 meant that the battle for the Superpole spots was fiercer than ever. Loris Baz (GULF Althea BMW Racing Team) managed to take the final position

inside the top ten by just 0.004 seconds, to the delight of the home fans. Eugene Laverty (Milwaukee Aprilia) was the biggest victim of these changes, as he ended up eleventh at Magny-Cours and forced to figure his way through tomorrow’s Superpole 1. 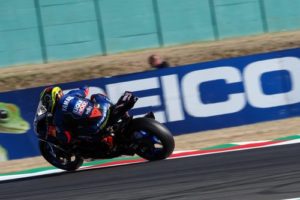 WorldSSP: Cluzel sets pace ahead of Mahias in Free Practice

Jules Cluzel (NRT) stamped his authority on the opening day of the Acerbis French Round with the fastest time in Free Practice at the Circuit de Nevers Magny-Cours. The NRT rider, second in the FIM Supersport World Championship standings, set a blistering time of 1’40.941 with four minutes to go in Friday’s final practice session, sending a message to championship leader Sandro Cortese (Kallio Racing) ahead of a decisive final European race of 2018.

The Kallio Racing rider could only finish third for the day and half a second behind Cluzel after being unable to improve upon his best time from FP1 and will have to fight back on Saturday if he is to match his main rival’s pace. He was also the only rider amongst the top 9 who couldn’t improve his best time in FP2

Second on Friday was Lucas Mahias (GRT Yamaha Official WorldSSP Team), 0.239 seconds behind Cluzel. Like the NRT man, Mahias arrives to this weekend after suffering heartbreak at the last round in Algarve and will be aiming to claim his second win of the campaign in front of his home fans.

Randy Krummenacher (BARDAHL Evan Bros. WorldSSP Team) was fourth on Friday, ahead of Federico Caricasulo (GRT Yamaha Official WorldSSP Team), who is looking in France for his third consecutive win, in fifth. Sixth was for the surprising Corentin Perolari (GMT94 Yamaha), who managed to sneak himself amongst the top six championship contenders by ending the day faster than Raffaele De Rosa (MV

Eighth on the day went to Hikari Okubo (Kawasaki Puccetti Racing), with Thomas Gradinger (NRT) in ninth, and Kyle Smith (CIA Landlord Insurance Honda) – second at the Portuguese Round – closing the group of ten riders who qualify directly for Saturday’s Superpole 2.