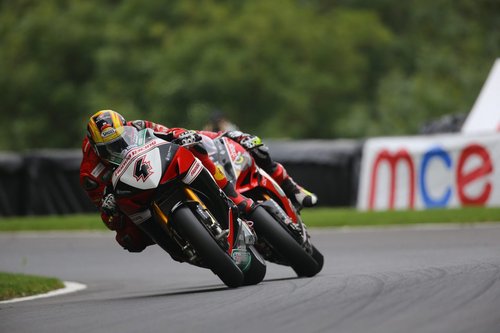 Jason O’Halloran added to Honda Racing’s trophy collection after placing his Honda CBR1000RR Fireblade on the podium, not once but twice today at Honda’s home race Cadwell Park, grabbing a third and second place finish.

With pace hot all weekend at the Lincolnshire circuit for the eighth round of the MCE British Superbike Championship, racing was set to be thrilling and it didn’t disappoint. Starting race one from fifth place, O’Halloran had his sights set on the front group from the get-go, and by the third lap had moved into second place.

It was a three-way battle at the front and ‘The O’Show’ was not giving up on a podium finish. Swapping positions between second and third, the Honda rider was in second place until Shane Byrne made his move on the 14th lap. O’Halloran eventually crossed the line in third place, behind Leon Haslam and race winner Byrne.

The Aussie got a cracking start in race two and briefly touched on the lead spot, but had dropped back into third by the end of the rotation. By the fourth lap he had his sights on second place and a mistake by Byrne saw O’Halloran slot into second.

Once settled in second, the Honda rider started to chase down Haslam and for the remaining 12-laps was hot on his heels. Drama happened in the closing stages of the race when O’Halloran missed a gear going into Barn corner, but he was able to save and crossed the line in second place, scoring his first double podium of the year. The results from today see O’Halloran secure his place in the 2016 Showdown. 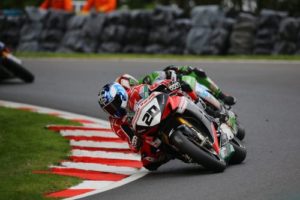 Meanwhile Dan Linfoot was pushing hard from his ninth place start on the grid in race one and lap by lap the Yorkshireman was gliding his Fireblade through the pack, and making up places. Unfortunately on the seventh lap, while chasing fourth place he slipped off unhurt at the Chicane, putting an early end to his race.

With the Fireblade repaired and unhurt from the fall Linfoot lined up on the grid fifth for the second race and by the end of the first lap was up into fourth. A good battle for the fourth and fifth place spots then took place and the Honda man eventually crossed the line in sixth place. Linfoot remains fifth in the overall championship standings. 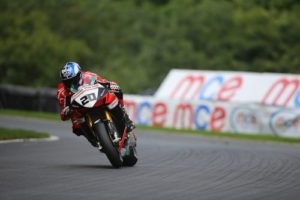 Jenny Tinmouth enjoyed two solid races at the Lincolnshire circuit. In race one after an unfortunate stall off the line, she dug deep and started to catch the group in front. Flying on her Fireblade machine, Tinmouth had a 4.4-second faster race time than at the circuit last year. Crossing the line in 28th place, the Cheshire rider scored another personal best at Cadwell Park.

Race two saw another determined Tinmouth over the 18-laps and her best lap time was two-tenths faster than in race one. Smashing the personal best she’d set earlier in the day the Cheshire-based rider crossed the in 24th place.

Full of confidence the Honda Racing team will now return to the workshop and prepare all three Fireblades for the next round of the championship, which takes place at Oulton Park (9-10 September).

Well this is my first double podium of the year so I’m peaking with that! We have worked hard this weekend and have been at the top of all sessions since Saturday morning, and to finish both races on the podium is a great result for us. I felt in the second race the pace wasn’t as quick as earlier in the day. I couldn’t get past Leon on the brake, but towards the end he put the hammer down, he then made a small mistake and I caught back up. I had a moment at Barn; I clicked neutral and went into first instead of second and nearly had a highside, but managed to save and got the second place spot. I’m so pleased with the weekend, two podiums today is great and we got a big points haul and have secured a place in the Showdown with three races to go. I’m now looking forward to the title fight at the end. A huge thanks to my team for all their hard work, it’s all coming together and it’s nice to be able to repay them with solid results like today. 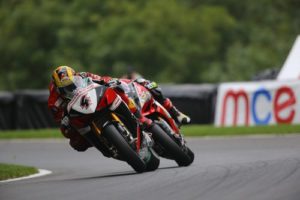 Today if I’d finished race one in fifth and race two sixth I’d be quite happy, as it’s where I need to finish to be in the Showdown. The crash this morning I of course was disappointed with, I seem to be grinding the engine case so we can learn from this and take this information away with us. Race two was a lot better for me and finishing sixth has kept me fifth in the overall standings, but I still have some work to do. I’m not particularly happy, but I will take the points and look forward to Oulton where I’ll dig deep and hope to finish the three races higher, and with some podiums. Sorry to my guys for the extra work this weekend!

This weekend has been great and I am chuffed to bits leaving tonight! I have had two solid finishes, have scored personal bests in both races, my lap times were better than race one and my race pace was so much faster than last year – I also stayed on all weekend, so I’m mega happy! Everything just felt good this weekend and the package the team put together with the Fireblade was faultless. I can’t wait to get to my home round now at Oulton Park, we have three races there and I can’t wait to get going again!

I’m so pleased with Jenny this weekend, she had two solid races and scored personal bests in both and it’s a good progression. She’s feeling comfortable with the Fireblade again and I’m really happy with her and the guys involved to come away with the results this weekend. Dan unfortunately he crashed in the first race, but had a much better run in the second race and finishing sixth keeps him in the Showdown top-six. Currently at this moment we are the only team to have two riders in the top-six Showdown, so that is really pleasing. Jason what a great weekend for him, from the start he’s been in the front group and to walk away with two podiums and securing his place in the Showdown is just great news for us. Overall it’s been a good weekend for Honda Racing at Cadwell Park and we’ll now look forward to Oulton Park where I hope we can continue our good form.